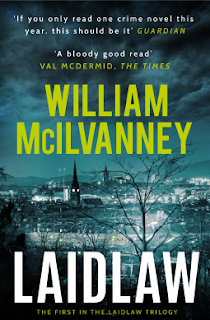 Laidlaw is a re-release of the original police procedural by William McIlvanney. Originally published in 1977, this re-formatting from Canongate on their Black Thorn imprint was released in paperback and ebook format April 2nd 2020.

There has been an ocean of commentary on tartan noir (and Scandi-noir and all their siblings). I have heard Laidlaw (there are three books in all) referred to as Scottish noir (or at least a precursor) and while that might be strictly speaking true, it is certainly gritty and brooding and Scottish, it's much more than that. I love crime novels with imperfect protagonists, Laidlaw is that in spades.

One of the things that sets this one apart is that McIlvanney was a remarkably adept writer, precise and masterful. There is not one fumble in the book. There is a spareness to the prose (the author was also quite well known as a poet). The characterizations are rich, varied, and precisely rendered. This might be the best crime novel I've read; it's certainly one of the best at any rate.

That being said, this is a relentlessly dark book. It had been a decade or more since I read it last and it has aged surprisingly well.  It's a beautifully written book. I'm glad to see it being presented to a new generation of readers.