Heart of Black Ice (Sister of Darkness: The Nicci Chronicles #4) 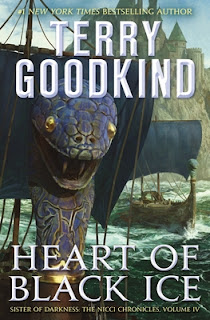 Heart of Black Ice is the fourth book in the Sister of Darkness cycle by Terry Goodkind. Released 21st Jan 2020 from Macmillan on their Tor imprint, it's 528 pages and available in hardcover, paperback, audio, and ebook formats. It's worth noting that the ebook format has a handy interactive table of contents as well as interactive links. I've really become enamored of ebooks with interactive formats lately.

One of several series in the Sword of Truth universe, this cycle is an epic campaign fantasy completing (at least for the time being) Nicci, Nathan, & Bannon's story arc. There is no spoon feeding of backstory and as such, it's emphatically not a standalone. This series (one of several) contains over 2100 pages by itself and the entire world arc probably contains well over 10,000 pages of content at this point.

Terry Goodkind is a powerhouse of a writer. He's prolific, pumping out an amazing oeuvre in the 2.5 decades since Wizard's First Rule dropped in 1994. The books have proven to be solidly popular since then with a body of work that is impressive by any standards.

For readers who have gotten to this point in the series, this is more of the same (and better than the previous book in the series which was sadly a low-hurdle exercise). For readers unfamiliar with Goodkind or this universe and magic system, I recommend starting with Wizard's First Rule.

I recommend it to fans of "hard" campaign fantasy books shaped like bricks who are already invested in the series. The books are written for them. The book (indeed the series) is full of harsh objectivism and shades-of-evil which grated on me after a while. I found the experience grueling. There are graphic descriptions of body horror, torture, threatened sexual abuse, cannibalism, etc which I found I needed to skim over (yes, it's mostly done by the really bad guys, but in nauseatingly detailed descriptions).

Three stars for me, likely four for fans who are already invested. I've been around since book one in 1994, but I honestly don't know if I'll continue with the author.