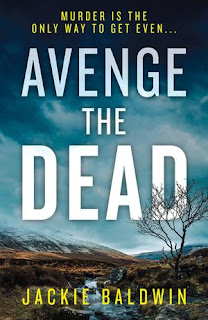 Avenge the Dead is the third book in a modern Scottish procedural series by Jackie Baldwin. Released 28th Feb 2020, it's 400 pages and available in ebook format.

This is a gritty modern day procedural with an ensemble returning cast of characters. Although it's the third book in the series, I had no trouble following the plot, the author is adept at providing necessary backstory without info-dumping or being overwhelming. It works well as a standalone.

The plot is well constructed (if dark) and includes the de rigueur  tie-in to past occurrences resonating down through time to the present. There are a number of grisly murders (which are not too graphically described on-page). There is some sexual content, but again nothing too racy on-scene. The language is as expected, modern police procedural level including f*ck and other cursing. There is mention of drug use and some domestic abuse.

My own experience, not having established a previous relationship with the characters, was that main character Frank, was wallowing unattractively in self pity, spiraling into out of control alcoholism and unprofessional conduct, and was difficult to like. I imagine that people who are already fans of the series will appreciate the character development more than I could.

It was a diverting read. Not quite up to Val McDermid (but who is?) or Ann Cleeves (ditto), but in that vein. Quite a solid read.