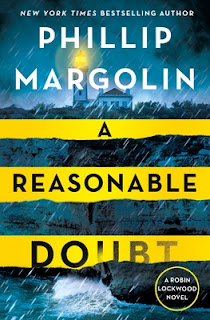 A Reasonable Doubt is the 3rd Robin Lockwood mystery by Phillip Margolin. Released 10th March 2020 by Macmillan on their Minotaur imprint, it's 304 pages and available in hardcover, mass market paperback, audio, and ebook formats.

This is ostensibly a crime thriller with a lawyer protagonist. She's a former mixed martial arts fighter as well as a trial lawyer and part time sleuth. The plot is engagingly twisy but tended to wander a bit and flip back and forth between the present day and earlier plotlines without much delineation.

This is also the third book in the series and having read this one as a standalone, I found myself having a difficult time building a rapport with the characters. I'm sure fans of the earlier books won't have the same problem, but some of the secondary characters were difficult for me to keep track of.

The main plot arc included a lot of stage magic, illusions, and the show people who make the tricks work. I have always been fascinated by illusion and stage tricks and enjoyed that part of the plot. The author also includes some legal procedural content which I found fascinating (he's a former trial lawyer, so seems to know what he's talking about).

While the author is undeniably gifted and writes engagingly, for me the plot got bogged down in secondary (and tertiary) plot threads mostly concerning what a jerk the murdered magician was and how much he deserved his fate.