The Burglar in Short Order 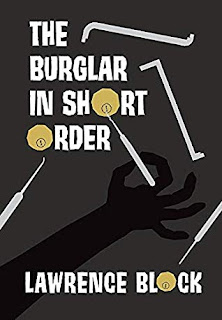 The Burglar in Short Order is a new collection of short pieces and chapter excerpts from both new and previously published work by Lawrence Block. Due out 29th Feb 2020 from Subterranean Press, it's 144 pages and will be available in a hardcover limited edition from the publisher.

I've loved Bernie Rhodenbarr since he first debuted 40+ years ago. It's a series I revisit regularly whenever I need a short and humorous uplifting read. They're wonderfully undemanding hugely entertaining reads. This collection, although admittedly short on new material, is filled with 15 selections perfect for a short interlude or commute read.

The pieces included are varied in point of view and narration. There's also a teaser at the end of the book which takes the form of a short dialogue between the author, Mr. Block, and Bernie, the fictional character, on what the future holds for Bernie's adventures since time has stood more or less still for Bernie while it's marched on for the rest of us. I also liked being able to read a very early story with a recognizable 'seed' of a story which later germinated into the Bernie/Burglar series. He's not named in the story, but it's proto-Bernie for sure.

This is a bittersweet collection and generally of a quality which compares well with the rest of the books. I definitely recommend it highly to fans of the canonical series as well as mystery lovers who were previously unfamiliar with Mrs. Rhodenbarr's son Bernie.

Five stars for Block fans like me, four for everyone else.