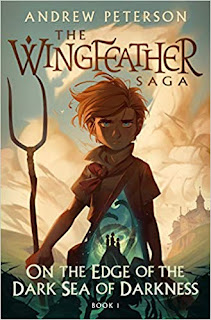 On the Edge of the Dark Sea of Darkness is the first book in the Wingfeather Saga by Andrew Peterson. Originally published in 2008, this reformat and re-release (with new illustrations and content) from Waterbrook, due out 10th March 2020 is 304 pages and will be available in hardcover format (other editions available in other formats).

This is part one of an epic fantasy which reminds me in a lot of ways of the scale of the Chronicles of Narnia or the Lord of the Rings. While it's admittedly not as well written (how could it be?), it does have a similar scope and reach. The author has a tendency to break the fourth wall often (asides to the audience are ok, but it's a device which in my opinion should be used quite sparingly). The footnotes are copious and extensive, and I found them a little tiresome.

The subject matter is largely a battle between good and evil, light and darkness, and a willingness to defend one's beliefs. Although often listed as a Christian selection, I read the book and didn't find -overtly- Christian doctrine or beliefs. It could certainly be read without the reader feeling catechized. The book is appropriate for all ages and there's no rough language or disturbing content.

The eARC which I received for review did not include the new artwork, maps, or addenda, so I can't speak to the quality of those. The cover art is lovely however, and I hope the new reformatted content is as well done.

Four stars. This would make a good selection for a family read, bedtime read, classroom or library circle read.