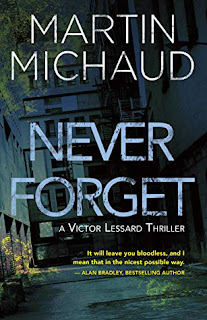 Never Forget is the third Lessard procedural thriller by Martin Michaud. Originally published in French in 2012, this is the first of the series to be translated into English.  Released 18th Jan 2020 by Dundurn, it's 576 pages and available in paperback and ebook formats.

This is a well written but often disturbing procedural thriller. The narrative is choppy and jagged for the first third of the book, switching abruptly between disparate elements both current and retrospective which circle and interweave ever more tightly until they become a single story including shadow politics, shockingly unethical medical research, cover-ups at the very highest level, corruption, dirty money and torture. It's a fairly hefty book (nearly 600 pages) and the author makes good use of the word count to develop the characters and move the story to its inevitable denouement.

The protagonist is flawed: depressed, a recovering alcoholic, physically and emotionally wrecked, suffering from PTSD and trying to have some semblance of a normal relationship with his adult kids (also troubled) and his lover (much younger, but a sane spot of happiness in his very messed up orbit).

The translation work is seamless. It doesn't read like a book in translation. I hope Dundurn go back and release the earlier books in English.

Four stars. Worth a read for fans of gritty procedurals.