It Walks by Night: A Paris Mystery (Henri Bencolin #1) 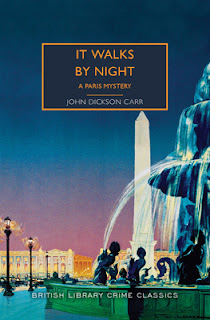 It Walks by Night is the first Henri Bencolin Paris mystery by John Dickson Carr. Originally released in 1930, this reformat and re-release from Poisoned Pen Press is 272 pages and due out 3rd March 2020. This edition will be available in paperback and ebook formats. (Other editions available in other formats). This book is one of the books in the British Library Crime Classics series and it's really nice to see these gems being brought back into print and presented to new readers. It's worth noting that the ebook format has a handy interactive table of contents as well as interactive links. I've really become enamored of ebooks with interactive formats lately.

As the others in the series, there is an introduction by mystery history maven Martin Edwards. As engaging as these classic mysteries have been, I have also looked forward in equal measure to Mr. Edwards' insightful commentary.

Carr is well known (with good reason) for his 'impossible' locked room mysteries. This is another such. Despite being almost 100 years old, it wears well, and still provides a load of atmosphere (in some places, positively creepy). The first murder is quite gory (a beheading) and there's a varied cast of suspects and a load of red herrings along the way.

The dialogue and style are admittedly a bit dated and true to the period, but I found it charming. For fans of golden age mysteries, it'll definitely be a plus, not a detraction.

Very well done. I have read a lot of Carr's work, but somehow had missed this one. Worth a read, especially for fans of the golden age.