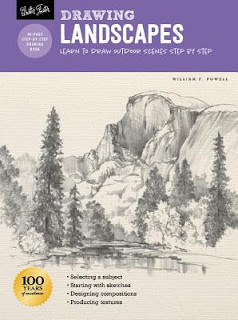 Drawing Landscapes with William F. Powell Learn to Draw Step by Step series. Due out 3rd March 2020 from Quarto on their Walter Foster imprint, it's 40 pages and available in paperback format. This appears to be a reformat and re-release of material first released in 1997 with the same title by the same author.

A short general introduction (10%) covers tools and materials including pencils, paper, blending tools, etc. The intro is followed by a group of non-specific tutorials on graphite techniques, shading, light, shapes and perspective. The following tutorial chapters are specific for different subjects (landscapes) and include specific tutorials: clouds, rocks, trees & branches, etc, leading to some full studies. There is also a very abbreviated tutorial on rendering some surfaces and finishes. It should be noted that the style of these renderings is very retro/traditional in a style which was popular in the early to mid 20th century, much of that popularity springing from the art of Mr. Powell himself.

Disclosure: I received an early eARC at no cost from the author/publisher for review purposes.
at February 23, 2020