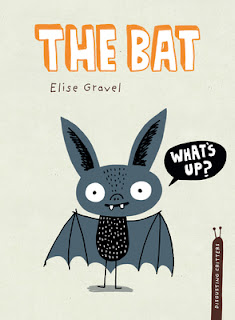 The Bat is a cute nonfiction picture book aimed at youngsters showing the coolness and usefulness of bats. Originally published in 2016 in French, this English edition is due out 4th Feb 2020 from Penguin Random House on their Tundra imprint, has 32 pages and will be available in hardcover format.

The art is whimsical and appealing (see cover), and the text is fact based and scientifically accurate. The important ecological niches and functions that bats perform are explained in accessible age-appropriate language as well as the challenges they face confronted with disappearing habitat, pollution, and other problems in the world today.

This would make a super choice for classroom/public library, homeschool library, or gift. Really cute and worthwhile subject for young readers. The graphic design and interactive dialogue would also lend itself quite easily to a bedtime read. My only quibble with the book is that it's apparently one of a series called (in English) 'Disgusting Critters' and while I do know that 'disgusting' is meant as an attractive choice of words for kids, and it's a book with a 100% positive slant toward bats as interesting and vital, it just sat wrong with me.  I wish they could've called the series Cool Critters, or Interesting Critters or something. I'm a middle aged science nerd, so I think flatworms are cool, so I'm not the target audience.

Four and a half stars.