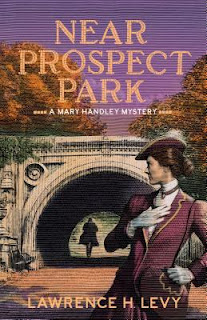 Near Prospect Park is the 4th Mary Handley mystery by Lawrence H. Levy. Due out 14th Jan 2020 from Random House on their Ballantine imprint, it's 304 pages and will be available in paperback, audio, and ebook formats.

Set at the turn of the 19th century, New York private investigator Mary Handley is investigating a theft and ransom case for W. H. Gilbert (of Gilbert & Sullivan fame) when her life is turned upside down by the murder of her husband, an investigative reporter. It's not long until all the disparate subplots merge together and Mary works through her grief by replacing it with anger and single minded determination to solve the mystery of her husband's murder (among others).

This is surprisingly dark compared to the earlier books in the series. There are themes of suicide, depression, rape/date rape, violence against women, and more. It is well written but it should be noted that apart from direct mentions of characters and historical events from 1896, it reads very much like a novel set in the modern era. The dialogue, jokes, descriptions, and narrative really could be in the present day. Some of the secondary characters (Mary's mother) were abrasive and annoying in the extreme. I've no doubt that it was intentional on the author's part, he's a gifted storyteller.

I enjoyed the book. I'm sure it will be a good match for lovers of historical procedural mysteries.

Disclosure: I received an ARC at no cost from the author/publisher for review purposes.
at January 11, 2020