Come Homicide or High Water (Welcome Back to Scumble River #3) 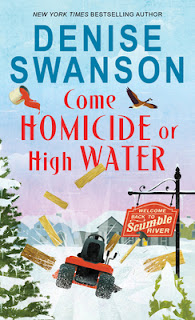 Come Homicide or High Water is the third book in the spinoff cozy mystery series by Denise Swanson. Released 31st Dec. 2019 from Poisoned Pen Press, it's 352 pages and available in paperback, audio, and ebook formats.

This is an odd cozy with an extremely quirky set of characters. There are some humorous moments and overall the whole is fluffy, humorous, and passably well written. There is a murder mystery wrapped in the disappearance of an elderly woman. Multiple disparate plot threads intertwine in the central murder and disappearance including house-building contractor woes, antagonistic counterproductive school administrators, and main character Skye trying to raise twins and keep her marriage on an even keel living in an RV on site where her house is being rebuilt.

I didn't find Skye a particularly sympathetic character, she's meant to be a school psychologist and has demonstrably bad impulse control and planning issues of her own. I found myself being yanked out of the story by eye-watering dialogue when any of the Dooziers show up. The buildup and denouement were just strange and 'off' to me.

I read this one as a standalone which undoubtedly contributed to my disorientation when reading. The reviews I've read are almost universally glowing. I think this would be a better fit for fans of 'wacky & whimsical' small town cozies. Bonus points for fans of the author's other work. The language was surprisingly strong (lots of cursing and adult themes) for a warm & fuzzy type cozy. The author (who was a school psychologist herself) also writes some characters who have mental health issues in a manner which seemed unnecessarily stereotyping.

Three and a half stars, rounded up because the prose really is quite good for the genre.