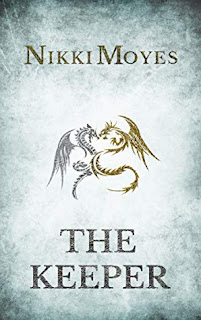 The Keeper is the first book in a new series by indie author Nikki Moyes. Released 10th Oct 2019, it's 366 pages and available in paperback and ebook formats. It's worth noting that the ebook format has a handy interactive table of contents as well as interactive links and references throughout. I've really become enamored of ebooks with interactive formats lately.

This is a potentially interesting mash-up of a dystopian YA/NA novel (echoes of the Maze Runner and Hunger Games) with some odd romance tropes (a novelized version of reality/bachelorette show) tacked on. The author has a good start with solid world building, ecology, alien life forms, shapeshifters, dragons, and more, but I felt that the grafted on reality TV show subplot felt like filler.

The pacing was off to me as well. There were a number of places which really dragged for me, despite the fact that people were killing one another or being killed left right and centre. I never felt the tension which suggested that any of the main characters were -really- in danger. There's quite a bit of deus-ex-machina going on. The dialogue felt seriously stilted and unnatural in some places and there were a lot of places where otherwise supposedly mature adults just made me want to bang my head on my desk.

Despite that, the author can write engaging fantasy and has a clear and adept voice as a storyteller. The book felt unfinished and in need of unflinching editing.