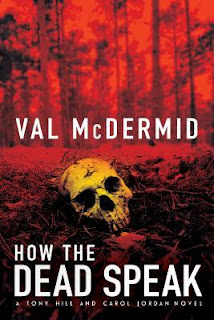 How the Dead Speak is the 11th book in the Tony Hill & Carol Jordan series of psychological murder mystery/procedurals by Val McDermid. Due out 3rd Dec 2019 from Grove Atlantic, it's 416 pages and will be available in hardcover, paperback, audio, and ebook formats.

I was unsure what would be in store for Tony & Carol after the cataclysmic denouement of the earlier book. This book begins with Tony serving a custodial sentence for manslaughter after being stripped of his professional qualifications and Carol suffering from debilitating PTSD which she was self-medicating with alcohol. I was concerned that the book would devolve into relentless misery and unhappiness, but I was (happily) wrong.

The author is one of the most technically adept writers I've ever encountered. Her writing is surgically precise, controlled, and masterful. This book contains several apparently disparate subplot threads which McDermid weaves together into an incredibly twisty and satisfying denouement. I'm looking forward to reading the next book in the series after seriously contemplating dropping the series after finishing the previous book.

Previous fans of the series will find more of the taut psychological twisty plotting characteristic of the earlier works. The author is adept at providing necessary backstory without resorting to info-dumping, so new readers will have no trouble following the story. I highly recommend this series to fans of the genre though, so going back and reading the previous books in order will prove enjoyable.

Four and a half stars. Another winner from a master writer at the top of her form.