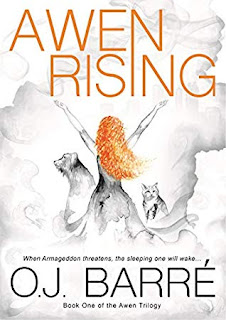 Awen Rising is the first book in a trilogy by O.J. Barré. Released 26th July 2019, it's 353 pages and available in paperback and ebook formats. It's worth noting that the ebook format has a handy interactive table of contents as well as interactive links. I've really become enamored of ebooks with interactive formats lately. For Kindle Unlimited subscribers, this book is included in the KU subscription library to borrow and read for free.

This is a well written and engaging near-future urban fantasy written in parallel timelines and third person pov.  The author draws very heavily on druidic lore and archetypes and good vs. evil in the form of protagonist Emily who is heir to the heritage of Awen and an unwitting force in a coming war for the survival of humanity.

The book doesn't read like a debut effort, it's quite a long book full of grand conflict and well drawn characters both human, animal, dragon, etc. The world building is detailed and complex and immersive. That being said there are some issues with dialogue and I found myself yanked out of the story by continuity problems occasionally as well as unnecessary inter-character drama. For readers who are offended by sexual content or language, the book contains both. I didn't find it egregious in either case, but it's something of which to be aware if that's an issue.

This is a diverting read and would be a good choice for lovers of the genre. Four stars.