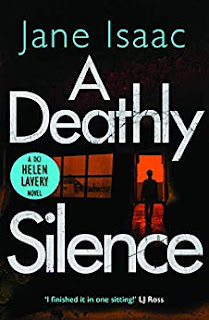 A Deathly Silence is the third book in the DCI Helen Lavery series by Jane Isaac. Released 15th Oct 2019 by Legend Press, it's 288 pages and available in ebook format.  This is a well written modern procedural and although the third in the series, I read it as a standalone and had no problems following the characters or keeping the plot straight in my mind. I fully intend to go and pick up the previous 2 books in the series as soon as I can.

The author is an adept writer. The pacing, dialogue, plotting, and entire story arc are precisely controlled and well paced and presented. I found the plot engaging and twisty with a surprising and satisfying denouement. This is a solidly entertaining and enjoyable read especially for fans of modern British procedurals. The language is PG rated, nothing too graphic or over the top. The slang and spelling are British (torch, lift, flat, etc), but nothing out of the ordinary or unintelligible in context. There is a fair bit of brutal description of previously occurring torture, including a murder of a police officer, used in context and having happened previous to the narrative.

The plot revolves around a single main plot thread with a very few supporting subplot elements, so it's a satisfying book to sit and read without being distracted by a story which is all over the place.I was impressed with how realistic the investigation seemed, and how believable the internal politics were, with different departments making the process of murder investigation more difficult than it needed to be because of bureaucracy.