Penny for Your Secrets (Verity Kent #3) 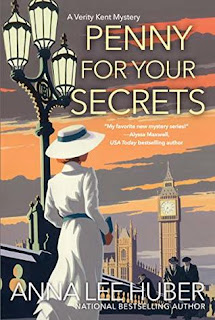 Penny for Your Secrets is the third Verity Kent mystery by Anna Lee Huber. Released 29th Oct 2019 by Kensington, it's 336 pages and available in a library edition, paperback, audio, and ebook formats.

This is a really enjoyable period (interwar England, 1919) cozy murder mystery series and this book in particular highlighted the difficulties of communication and trust building between main characters Verity and Sidney. The author is adept at character building and uses story to develop and deepen her returning characters' personalities and motivations. The secondary characters are also well developed and believable.

The story is skillfully built around real life occurrences and rivalries and the author weaves these background tidbits into the story seamlessly. These undoubtedly represent a large investment in research time on the author's part, but it pays off in verisimilitude in the narrative.

The plotting and pacing were variable. There were some parts of the book which dragged a bit for me. I did like it that the author intentionally leaves large plot elements unresolved and I'll be looking forward to the next books in the series. The denouement was exciting and it's nice that Verity is strong and intelligent and can take care of herself, more or less. The author does give Sidney some latitude for heroic swoon worthy rescues occasionally, which I admit that I like. For readers who insist that their fictional heroines never need rescuing, there might be some slight eye-rolling involved in this one.

This is a period cozy with solid storytelling, good plot, very strong characterizations and dialogue. The language is clean; there's a nice romance element between the main characters. There is some strongly implied sexual content, used in context, but nothing graphic at all.