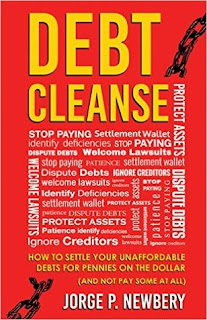 Debt Cleanse is a informational guide for reducing or eliminating debt and avoiding abusive debt collection. Released in 2016, it's 418 pages and available in paperback, audio, and ebook formats.

This is an exhaustive, well annotated guide to the legal ins and outs of the debt collection industry, and how to ameliorate or eliminate consumer debt. I am conflicted about this guide. It is absolutely 100% true that student, medical, and usurious consumer debts are crippling Americans and in some cases driving them to desperation (and in extreme cases, losing their lives from stress related illnesses and suicide). On the other hand, this guide's 'stick it to the man and refuse to pay debts' vibe doesn't resonate well with me. There is a lot of advice about exploiting loopholes and sloppy record-keeping on the part of debt collection agencies in order to avoid having to pay debts. The author jokes about making bad credit scores sexy, and advises consumers to just stop paying bills and stockpile cash in order to avoid having assets seized. He also advises shifting jobs multiple times to avoid garnishment of wages. The author also seems a little jolly about his own harrowing experiences after a natural disaster wiped out his own business and left him over 25 million dollars in debt.

On the other hand, predatory lending practices and the abuse of the vulnerable lower and middle classes have resulted in a latter day medieval serf slave class who are unlikely to escape literal financial servitude in their lifetimes (and indeed are selling their descendants into the same awful perils).

This book provides a number of form letters that readers can use to require proof of debts, as delaying tactics, and possibly get some debt freedom since lenders generally concentrate on the vast majority of debtors who don't/can't fight back.