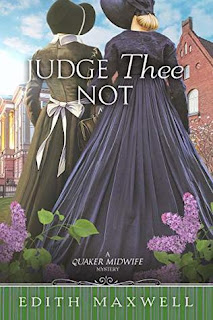 Judge Thee Not is the 5th Quaker Midwife mystery by Edith Maxwell. Released 10th Sept 2019, it's 327 pages and available in paperback and ebook formats.

This is an interesting premise for a cozy series. Protagonist Rose Carroll is a 19th century midwife who's a Quaker. As a midwife, she comes into intimate contact with families in her duties as a healthcare professional. She also encounters secrets which sometimes people would prefer remain hidden.

I read this one as a standalone, and as an introduction to the characters and setting, it worked well. I had no problems following the plot or keeping track of the characters and their relationships. The plotting was unhurried and the book was long enough that the author could develop the tension arc at her leisure. I found my interest wandering somewhat with this book (though I wasn't tempted to skim through it).

The thing which detracted a fair bit of enjoyment for me was that the main character, as a Quaker, used the second person 'thee' for both nominative and oblique forms, without holding to the other declensions apart from the possessive form (thine). This is, as far as I have been able to find out without a huge effort, actually historically accurate to New England Quakers in the 19th century. They actually didn't say 'thou'.  I winced every time the main character said (nominative form) 'Thee shall do'... 'Perhaps thee would prefer'... etc.

The author took some license with the societal and medical mores and knowledge of the time, but it wasn't terribly egregious.

The language is clean and there is no direct sexual content (a few chaste kisses between an affianced  couple, and a referral to a historical rape in the protagonist's relatively distant past). The murder and assaults are relatively bloodless and occur off scene.

Three and a half stars. I would recommend these to fans of historical cozies.