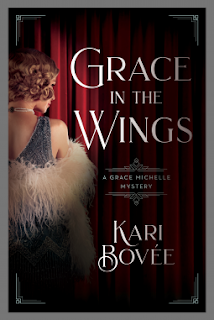 Grace in the Wings is the first book in what is ostensibly a new series by Kari Bovée set in 1920's NYC and the California film industry. Released 19th Sept 2019, it's 348 pages and available in paperback and ebook formats.

This is a murder mystery romance with some thriller overtones. It's set in 1920/21 in New York and California and the plot is peppered with real life characters (Flo Ziegfeld, Hedda Hopper, Mary Pickford, etc) who are woven into the plot with varying degrees of skillfulness. The plot is relatively straightforward and character driven. Main character Grace is a former street kid, taken in by Ziegfeld with her sister Sophia and raised in the theater world under his protection. Despite living on the streets and being raised in the theater world, Grace is a naive virginal damsel (in distress). Enter devastatingly handsome romantic lead guy Chet Riker (stage left), he's a good guy who got on the wrong side of a mobster borrowing money to pay for his estranged mother's surgery.

This could be (and mostly is) a straightforward romance/cozy mystery except for the last half of the book.  There's a lot of fairly graphic violence,  sexual content (including consensual sex, threatened rape and kidnapping, graphic violence against female characters), drug use, manipulation, etc. I personally found the denouement abrupt and far too convenient.

The writing is unpolished (but promising) and would have benefited from some ruthless editing. Despite the problems with my suspension of disbelief and the 'too much' denouement, I can certainly see this developing into a good period series.

For Kindle Unlimited subscribers; this title is available in the KU subscription to borrow and download for free. It's also worth noting that the ebook format has a handy interactive table of contents. I've really become enamored of ebooks with interactive formats lately.