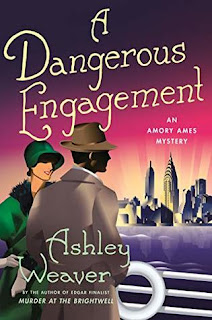 A Dangerous Engagement is the 6th Amory Ames mystery by Ashley Weaver. Released 3rd Sept 2019 by Macmillan on their Minotaur imprint, it's 309 pages and available in hardcover, audio, and ebook formats.

This is a very well written stylish murder mystery series with sophisticated protagonists who are a married couple. Set in the interwar period, Amory and husband Milo are upper class (he's trying to be a good husband, reformed from his playboy days), intelligent, and modern. In fact, I've always gotten a sort of British Nick & Nora vibe from the books with the witty repartee and clever plotting, with a little dash of a more serious Tommy & Tuppence, and something all their own. The books aren't derivative at all, the author's talented and the characters stand quite well on their own.

This book sees them heading to New York for the wedding of Amory's childhood friend Tabitha. Hidden motivations and underhanded lucrative business dealings within the wedding party leave Amory less sure of her footing than on her home turf in England. Although this is the 6th book in the series, it does work quite well as a standalone. There's enough backstory woven into the narrative that readers new to the series won't have any trouble sorting out who's who.

This entry was well paced (if a trifle slow at the beginning) and solidly plotted. The dialogue is witty and rings true to the period. The setting was novel change for the main characters and seeing them in the USA and in much less formal surroundings than usual allowed for some interesting insights into their marriage and the way they worked together.