Who Was Jack the Ripper? 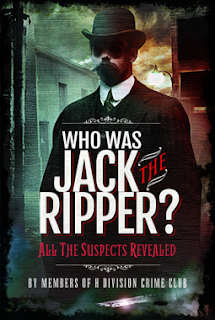 Who Was Jack the Ripper?: All the Suspects Revealed is a semi-scholarly look at the possible identity of Jack the Ripper examining the 11 most likely persons of interest using modern forensic and detection techniques.

Due out 19th Nov 2019 by Pen & Sword on their True Crime imprint, it's 208 pages and will be available in hardcover format.

This is a dense, fact-heavy book written by acknowledged 'Ripperologists'. The 11 potential real identities of Jack the Ripper are elucidated one by one with verifiable historical facts and with a (mostly) logical progression. I found myself reading each chapter and thinking that the author/essayists made a darned good case for every one of the candidates.

The essays themselves are a variable lot. All are well written and enjoyable (if that can be said of the sometimes graphic descriptions of the crimes themselves). The stark reality of existence for the poorer classes in London (especially women without the protection of a family) is a red thread throughout the essays and the authors don't mince words.

I would recommend that readers not try to binge read the book, since the variable voices and information loading were sometimes overwhelming. (I kept having to look up which of the historical players was which).

Especially for historical true-crime aficionados, these essays will make a diverting read. (Spoiler alert, this is a treatise of 11 identified possible culprits, there are no eye-searing 100% incontrovertible denouements presented here).

Disclosure: I received an ARC at no cost from the author/publisher for review purposes
at September 15, 2019