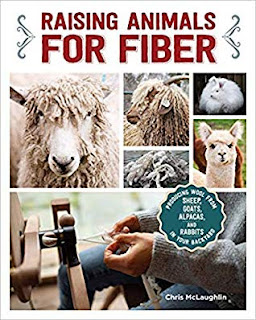 Raising Animals for Fiber is a tutorial guide for suburban and rural landowners who want to raise their own animals for fiber. The book is aimed at the hobbyist/smallholder and emphasizes the keeping of fewer animals rather than large production type setups.

Released10th Sept. 2019 by Fox Chapel on their CompanionHouse imprint, it's 176 pages and available in paperback format.

The book concentrates primarily on 4 different species of fibre animals: sheep, angora goats, alpacas, and angora rabbits. There certainly are (as the author states) other animals (highland cattle, llamas, dogs, cats, musk oxen, etc) which are kept for fibre in addition to their other uses, but they're not primarily fibre animals and aren't kept primarily for their fibre production, so they're somewhat beyond the scope of this book.

The book is split into an introduction which covers the basics of sourcing and acquiring good quality animals as well as deciding which animals to keep based on space limitations, practicalities, desired outcome and more. I liked that the author includes some cold hard facts about time and money realities along with the appealing pictures of happy healthy fibre animals. The introduction contains about 10% of the book's content. The following 4 sections (one for each animal: sheep, angora goats, alpacas, angora rabbits) contain an introduction, followed by subchapters covering some of the jargon for each type of animal, a discussion of the fibre they produce, breeds, collecting and processing the fibres, housing/fencing/feeding, breeding, and other important considerations and some troubleshooting.

The chapters obviously aren't as comprehensive as a species specific book, but they give a good solid basic general overview and enough information to get started on the quest to acquire basic stock (and hopefully not get taken advantage of).

I can honestly say that this is a book I -wish- I had had access to when I started owning sheep (and to a lesser degree rabbits).

The photography is mostly stock, but well presented and clear and supports the text well. The author's style is very informal, accessible, and friendly. I enjoyed reading the book, it's one I could see readers keeping as a home resource. This would make a superlative gift for smallholders or fibercrafters wanting/dreaming of expanding into producing their own fibres.