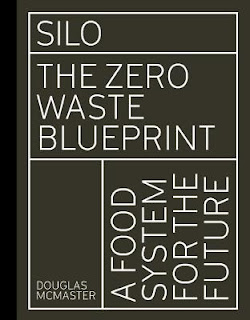 Silo: The Zero Waste Blueprint is ostensibly a part philosophy and part DIY book by Douglas McMaster. Due out 27th Aug 2019 from Quarto on their Leaping Hare imprint, it's 176 pages and will be available in ebook and hardcover formats. The ebook version is available now.

This is a difficult book to review. On the one hand, the idea of zero waste and putting a stop to our out of control consumerism is admirable, necessary, and absolutely vital. On the other hand, there's something weirdly dichotomous about a professional restaurateur (however well meaning) whose products the public pays for, using the platform to condemn consumerism.

The subtitle is 'A Food System for the Future' which led me to expect some sort of blueprint for making steps toward implementing measures for reducing or eliminating waste in our daily lives. The book seems to mostly be a memoir of the difficulties of opening Silo, the restaurant, and adhering to his original vision of a zero waste establishment. There's a fair bit of reminiscing about his educational and training path as a chef, his encounters with other chefs and the cooking competitions in which he took part (and won or lost spectacularly). The first part of the book is fairly self indulgent, rambling, egotistical, and full of sentence fragments. It's quite literally difficult to read. In addition, each of the first sections are accompanied by high contrast sidebars with koans such as LIMITATION BREEDS CREATIVITY, FOOD IS PRECIOUS, and PROGRESS IS MESSY.

The second part of the book (roughly 19% of the content) contains a rambling discussion of distribution webs and gigantic waste in the forms of fossil fuel use, energy, packaging, time, etc. There are numerous diagrams showing different methods of transport and delivery.

The third part includes  recipes for buying in bulk and cleaning supplies minimizing packaging and using reusable compostable sponges, cloths, etc. This section also contains a year's worth of recipes in menu form which utilize local seasonal ingredients. Some of the recipes are really odd (potato skin ice cream), most all of them are 'way out there'. Quite probably adventuresome foodies will find something to titillate (Hokkaido pumpkin, forced rhubarb & British sumac?).

The fourth part of the book draws together many of the ideas in the earlier sections. There are no definite hard and fast conclusions, however there is a lot of food for thought. There are no quick fixes for healing the planet, or sustainability, or any overarching plans to get started on. This section of the book also includes intriguing, slightly surreal, visual art.

I did not winnow out a lot of useful information from this book. There is a huge amount of enthusiasm and burning fervor here and especially foodies who would know where to source sea beets and  pineapple weed locally and in season will doubtless find usable recipes and philosophy. This would make a good read for people who really enjoy restaurateur and food culture biographies.

Two stars for me, three+ for serious foodies.

Disclosure: I received an ARC at no cost from the author/publisher for review purposes.
at August 21, 2019