The Best Veggie Burgers on the Planet, revised and updated 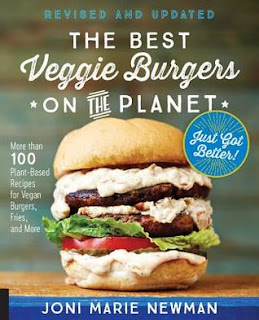 The Best Veggie Burgers on the Planet is a new specialty cookbook and guide by Joni Marie Newman. Originally published in 2011, this reformatted update from Quarto on their Fair Winds Press imprint released 23rd July 2019 is 240 pages and is available in paperback and ebook formats.

I'm usually a little wary of veg*n cookery which copies non-plant-based cuisine. To be honest though, summer, barbecue/grilling weather and entertaining season often brings family and friends together who 'don't like' vegetarian foods because it's 'bland and tasteless'. It's always nice to have some tried and true recipes which are anything but bland, and these true comfort food style burgers and fries with all the trimmings, fit the bill perfectly.

The book is lavishly and clearly photographed throughout (kudos to the graphics team!). It follows a sensible layout; an introduction with how-to's and basic general instructions is followed by chapters full of burger variations made with different base ingredients (meat-like protein, bean, tofu, grain, vegetable based, seitan, etc).  There are some breakfast sandwich recipes, as well as buns, sides and fixings for the burgers.

The ingredients are (mostly) easily sourced and can be found in any large grocery. The book also includes an alphabetical index for recipe access.

All of the recipes are helpfully provided in US customary measurements as well as converted to metric (SI) units.

I tend not to highlight any particular recipe when reviewing, all the ones we tested were quite good, but the cilantro lime rice side dish was -outstanding- and we've made it several times since our test runs.

Disclosure: I received an ARC at no cost from the author/publisher for review purposes.
at July 30, 2019