Murder in the Reading Room 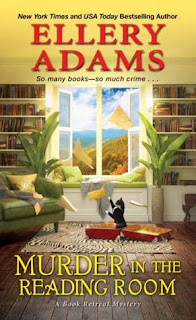 Murder in the Reading Room is the 5th Book Retreat mystery by Ellery Adams. Released 30th April 2019, it's 320 pages and available in paperback, audio, and ebook formats.

The author is quite prolific, with many other cozy series, and while this one is also a cozy, it's odd. It has a multi-book plotline and as such does not work at all as a standalone. The plots are half Dan Brown, half Miranda James and for me, those halves make a whole which is jarring and off-kilter. Protagonist Jane Steward is the keeper of the worlds most secret library (containing unknown Shakespeare folios, items saved from the Library of Alexandria, and apparently, previously unknown items from Hemingway (?!). The Stewards (and secret tactical support team called the Fins) are in a DaVinci code style secret war with the Knights Templar (yes those Knights Templar), and the current dastardly leader of the KTs is a deeply disturbed English bibliophile with an unhealthy Hemingway fixation.

Two months after her boyfriend is kidnapped, she's on her way with a sidekick to the Biltmore estate (yes, that Biltmore) to find and rescue said boyfriend. The police aren't involved, the FBI isn't involved, just her and her assistant riding to the rescue with a cover story so lame it wouldn't fool a goldfish (she's there for a conference and plans to look for Edwin, the boyfriend, between conference meetings). The Templars have already killed people and kidnapped her twin 5 year old sons (who are named Fitzgerald and Hemingway) who were happily recovered unharmed in book 4.

Anyhow, in the book's defense, I will say that the author has a deft touch with dialogue and the plotting is taut and well paced. The plot itself was just too much for me, and I couldn't ever completely suspend my disbelief enough to really give the book a fair reading. I had almost precisely the same reaction to everything I've read of Dan Brown's (and spent most of those books wanting to punch Langdon right in his smug face), and they've sold umpty-bazillion copies, so I'm obviously in the minority.