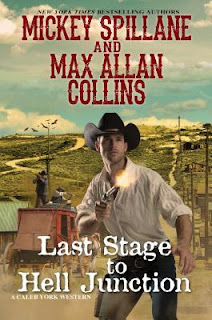 Max Allan Collins is an undeniably talented writer. He's prolific, writes genre spanning series with aplomb, and is generally just top-shelf. Mickey Spillane was a prolific writer of crime and screenplays and if some of his tropes seem slightly dated to today's audiences, it's because he -invented- the twists that writers are still using today.  This is a posthumous collaboration, written by M.A.C. around notes left by Spillane prior to his death in 2006. This is the 4th book which features Sheriff Caleb York and includes several characters from previous books in the series. The plot is self contained, and the book doesn't suffer from being read as a standalone.

Released 28th May by Kensington, Last Stage to Hell Junction is a fast paced 240 pages and available in hardcover, paperback, audio, and ebook formats.

It's increasingly difficult to find westerns these days. There are a few series being written currently, but the quality varies immensely. This series is very well written, gritty and face paced with solid characters and a taut plot driven narrative. Bullets fly and bad guys wind up under boot hill. It's a completely escapist read and perfect for the summertime TBR list.

The language is rough. There's some on-page sexual assault (an attempted rape of a young black girl) and a fair bit of racism in context (not glorified, just the opposite). The denouement is satisfying and exciting.

Worth noting for Kindle Unlimited subscribers, the first book in this series is included in the KU subscription.

I enjoyed this one. It will definitely appeal to western lovers, or in a pinch, lovers of gritty noir (change the setting and re-costume the players and it could be any mean street in any big city with fedora wearing punks being hauled in by a squinting tough guy PI).

4 stars. Well worth a read.