From Freezer to Instant Pot: The Cookbook: How to Cook No-Prep Meals in Your Instant Pot Straight from Your Freezer 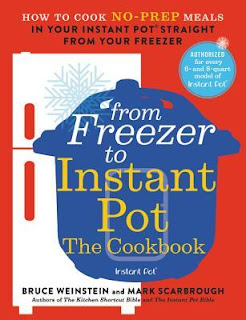 From Freezer to Instant Pot is an ingenious cookbook and guide to meal prep using the electronic pressure cooker. Released 16th July 2019 by Little, Brown & co., it's 192 pages and available in paperback and ebook formats. The authors are experienced and have several other cookbooks written for the Instant Pot, including my favorite general use pressure cookery book, The Instant Pot Bible.

I love the premise for this cookbook. The recipes are written around being able to take deep frozen proteins and ingredients directly from the freezer into the Instant Pot without thawing or precooking. Streamlining and simplifying food prep is something that really appeals to me. With everyone in my own family working or studying full time, being able to come home after a full day, exhausted, and still put tasty and nutritious food on the table is amazing.

The book follows a logical and accessible progression. The intro chapter includes technique notes and tips  concerning ingredient volumes (measure carefully so they don't overflow and ruin the pressure seal), removing foreign objects (that plastic 'diaper' under frozen blocks of meat if you've tossed the packages into the freezer directly from the supermarket and other packaging) and more. There's also a good general guide to cooking with the instant pot, and a useful weight and meat-type table for cooking times and special handling instructions.

The following chapters contain recipes for soups, noodles, chicken and turkey, beef, pork, and fish and shellfish. One of the special features of this book is that every chapter (except the fish one) has several customizable 'road map' recipes which allow for wide variations in sauces, cooking liquids, and amounts.

It's worth noting that the ebook format has a handy interactive table of contents as well as interactive links and references throughout. I've really become enamored of cookery books with interactive formats lately. Cooking (for me, all thumbs) with paper cookbooks in the steamy kitchen is a recipe for disaster (haha).

The eARC I received did not have pictures included, so I can't review those, but they will be included in the final release copy. (I have not reviewed typesetting or graphics, nor deducted from my review for the lack of photography in the ARC).

My final thoughts. This is actually a godsend for people who don't have hours to prepare and cook dinner. In the recipes we tried, however, the reality didn't quite live up to the promise. Cooking ground beef in the Instant Pot requires the extra step of breaking up the meat which is steamy and unpleasant (but do-able). If your chicken breasts or thighs are frozen solid, separating them can be problematic. The authors do discuss freezing meal sized portions, which requires an extra step. I'm not sure that most people don't do that already which is good. The recipes themselves are 'American family style' cuisine: roasts, chicken, pasta, soups, sloppy joes, etc.  The road map recipes allow for a nice amount of variation. The ingredients are easily sourced in any average grocery store.

Disclosure: I received an ARC at no cost from the author/publisher for review purposes.
at July 29, 2019