Fighter Fred and the Dungeon of Doom 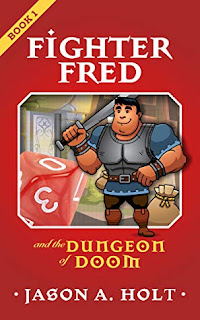 Fighter Fred and the Dungeon of Doom is the first book in a new series of fantasy adventures by Jason A. Holt. Due out 1st Aug 2019, it's 198 pages and available in ebook format.

This is a farcical humorous fantasy roleplaying novel written around a group of adventurers who all have their own reasons to raid the local dungeon for treasure, revenge, or coercion. The author has a lot of fun exploding the usual fantasy tropes and breaking the fourth wall constantly with asides to the reader about the GM, gear, armor, fantasy role-playing class restrictions and more. Poor Fred is the only one who doesn't know it's a roleplaying game.

This is a really really nerdy book. I found it perfectly charming and nostalgic. Anyone who has spent hundreds of hours eating pizza with a bunch of friends, throwing platonic solids around and making saving throws versus dex (to avoid falling into a lava trap) will probably "get it" and anyone who hasn't, probably won't.

I loved it and fully intend to get the follow up book ( Fighter Fred and the Wombat Wilderness ) when I can. Long live Fred!

Disclosure: I received an ARC at no cost from the author/publisher for review purposes.
at July 31, 2019