They Found Him Dead 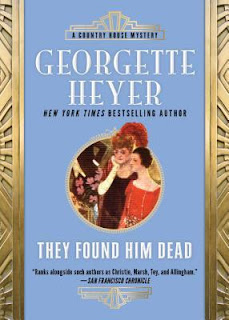 They Found Him Dead is a golden age British murder mystery by Georgette Heyer featuring Inspectors Hannasyde and Hemingway. Originally published in 1937, this reformat and re-release 5th March 2019 from Sourcebooks Landmark is 384 pages and available in paperback and ebook formats. This book includes the first appearance of Timothy Harte who also appears in a later book in this series.

There is something so appealing and urbane about golden age country house mysteries and this is a good example of the genre. There are a number of suspects with an array of motives. There's a romantic subplot which resolves satisfyingly. There are clues and red herrings. The actual culprit wasn't as much of a surprise as in some of Heyer's other books, but it was a good denouement with a good outcome.  The dialogue is witty and well written and the book plot moves along at a good clip which doesn't drag or become dull.

There is a surprising amount of humor to be found here and the addition of young Timothy (who also appears grown up in Duplicate Death) provides a number of genuinely funny scenes in the book. The language is relatively clean with just a bit of cursing, and murder.

It's wonderful that these old mysteries are being kept in print to be discovered and enjoyed by new generations of readers.