The Secret Life of Algernon Pendleton 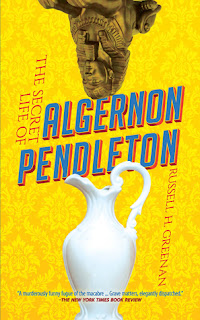 The Secret Life of Algernon Pendleton is a remarkably odd (but very well written) novel by Russell H. Greenan. Originally published in 1973, this reformat and re-release from Dover on 12th June 2019 is 224 pages and available in ebook and paperback formats. Other formats available in earlier editions.

For readers who are fans of very black humor, this is a cleverly written novel with a truly trippy protagonist. Algernon ("everyone calls him Al") Pendleton. His best interactive relationship is with a vase (yes, really) called Eulalia. He also has a lively relationship with a Turkish dealer in antiques to whom he sells bits and pieces of his great grandfather's collection of Egyptian artifacts.

Admittedly the book is a product of its time. There are some uncomfortable racial and sexist stereotypes which felt somewhat dated. They weren't gratuitous, though, and they fit with the narrative (still somewhat disheartening).

Technically this book is amazing. It's not easy to bring dialogue between a living person and an inanimate object to life and to do so with enough finesse that it's not pathetic or ridiculous. Some of the scenes raised the hair on my arms at the same time I was chuckling. Well plotted and paced, the dramatic tension arc is satisfying and unpredictable.

I love Dover in all their glorious weirdness. This book really deserves to be presented to a new generation of readers.  If the Dexter novels appeal, this one will be right on target.