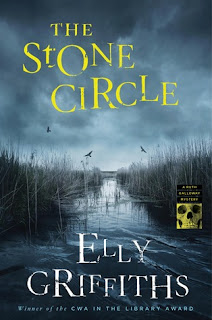 The Stone Circle is the 11th book in the Ruth Galloway series by Elly Griffiths. Released 7th May 2019 by Houghton Mifflin, it's 368 pages and available in hardcover, ebook, and audiobook formats.

This is the 11th book in the series and at this point, the characters have taken on a life of their own. Their internal motivations and aspirations are so well defined and 'real' that they feel like living people. I've noticed that for a lot of other series (especially 'serious' series) that the authors have either really hit their strides or developed an acute antipathy for their characters and it generally shows. I detect no whiff of ennui or antagonism in Ms. Griffiths writing toward her characters (even the odious Phil, whom I'd often like to box 'round the ears personally).

It's a really quality series of books. I like that Ruth is intellectual, not wispy and simpering. She is a realist and competent and broad minded, but also vulnerable where her emotions are concerned.  I adore slightly goofy but pure Cathbad and his family as well as the interrelations and families which have developed over the course of the books.

This is not really a standalone book. I adore the series and would recommend reading them more or less in order, especially since this book refers very much to the previous books and earlier occurrences. It is possible to understand the plot with this book as an entry point, but be warned there are spoilers aplenty if you read them out of order.

My only hope is that when they cast the characters for TV/film that they don't find some wispy waifish 20 year old to play Ruth. (I'm so in awe of ITV for casting Brenda Belthyn for Ann Cleeves' Vera, that's what I'm talking about)!