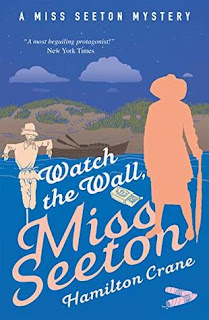 Watch the Wall, Miss Seeton is the 25th Miss Seeton mystery (the first mystery prequel was numbered 0, so this one is listed as #24). Originally written by Heron Carvic, the series was taken over and written in an homage style by Hamilton Crane after Carvic's death.

Released 21st Feb 2019 by Farrago, it's 243 pages and available in ebook and paperback formats.

There are only a handful of series, however well written, which keep me coming back for more year after year. The Miss Seeton books are amongst of the coziest of cozies, silly and very fluffy but they have an undercurrent of wickedly campy humor. They're very tongue in cheek and full of sly lampooning of everything from police procedurals to rural English village life in the mid 1970's.

I did feel this entry in the series was maybe a trifle more scattered and difficult to follow than most of the others. There were several disparate plot threads and they crossed and intertwined and were sometimes difficult for me to keep track of.  The characters, both the returning ensemble cast and the new, are well fleshed out and clearly written.

The language is relatively clean with the occasional 'hell, damn, or bloody' but nothing worse. No sexual content and no graphic or triggering violence.

I love these books so much, they're always a treat to be savored.

Disclosure: I received an ARC at no cost from the author/publisher for review purposes.
at March 16, 2019