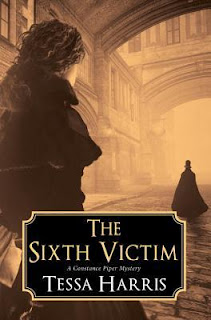 The Sixth Victim is the first book in a new supernatural historical mystery series by Tessa Harris. Released 27th March 2018 (first pub 2017) in a new edition by Kensington, it's 326 pages and available in paperback and ebook formats (earlier editions available in other formats).

I really enjoy Victorian English mysteries, but I generally stick to the ones without a supernatural or horror elements. The alternating PoV in this book does work well and the changing typefaces (the 'ghost' chapters are written in italics) keep things very clear. The characters are well written and the voices of the two main characters are distinct.

The author is adept at writing the period, and this new series is promising. I have read her other books featuring Dr. Thomas Silkstone, and though they are ostensibly written in an earlier time period (England during the American revolution) they really felt Victorian to me.

The pacing was slightly slow for me with this book and I struggled in a couple of places to finish. I think this was a -me- problem more than anything since this book was my bus commute read for a while and the gradual development didn't suit a 30 minute daily commute. Once I settled down and read it at home, I managed to finish it in a couple of settings.

This is historical fiction. The author's got an interesting take on the real Jack the Ripper story. It is skillfully woven around the real historical background, and the writing is strong. I will read the second in the series before making a decision about continuing with it. As might be expected, there is a fair bit of graphic description which won't be a surprise for most people who are familiar with the grisly specifics of the Ripper murders, but might be upsetting to readers who aren't familiar with the history.

The language is rough in places, and obviously there's a lot of violence.

Three and a half stars; probably more, for readers who enjoy a supernatural element in their mysteries.

Disclosure: I received an ARC at no cost from the author/publisher for review purposes
at March 19, 2019