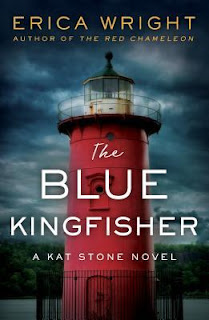 The Blue Kingfisher is the 3rd book in the Kat Stone P.I. series by Erica Wright. Released 23th Oct 2018 by Polis books, it's 320 pages and available in hardback and ebook formats.

This is the third book in an established series with returning characters and a such, it doesn't work as well as a standalone book would. There's enough back-story included that I didn't feel lost, but neither did I engage with the characters as well as I would have if I'd read from the first book.  I don't really recommend jumping in in the middle.

With that caveat, however, this is a well written and engaging book.  I absolutely loved Kat's friend Dolly and their mutual friend (and wigmaker) Vondya.  Kat's partner and protege in the P.I. business, Meeza, is very odd and I wonder about the overarching storyline development between them in future books.  Kat is described as very intelligent, with lots of street wisdom, but I often felt that she was bumbling from episode to episode. There are also a number of unresolved threads noticeably dangling at the end of the book. Not enough to really be annoying, but there.

The language is fairly rough and there are some graphically violent episodes. There is also a creepy scene with threatened sexual assault.

All in all a good, well written, readable P.I. thriller set in modern day New York. I did enjoy it and will give the earlier books a read-through before I make a decision whether to continue with the series.

Disclosure: I received an ARC at no cost from the author/publisher for review purposes
at March 05, 2019