The Lady in the Cellar: Murder, Scandal and Insanity in Victorian Bloomsbury 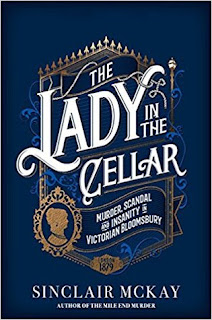 The Lady in the Cellar is a new true-crime book from journalist & author Sinclair McKay. Released 30th Oct 2018 on Quarto's White Lion imprint, it's 320 pages and available in hardback and ebook formats.

This is a meticulously researched and written book.  The narrative, as it is, it not fictionalized in any meaningful degree and is mostly written from historical records and court transcripts.  It can be slow going and actually reads like a court transcript with a great deal of 'he said, she said, and do you recall'.

The biggest takeaway for me was in the descriptions of Victorian life and the living arrangements of otherwise relatively wealthy people in England at the time.  The society was so rigid and set that people falling outside the 'norms' (i.e., wealthy unmarried women without close family supervision, girls/women who didn't conform to the life choices which were societally acceptable, some immigrants, etc) were often in complete free fall and vulnerable to exploitation and murder.  The other really interesting aspect of this book for me came in learning more about the attitudes toward mental illness.  The fact that several people who lived in the boarding house at the same time suffered from poor mental health to one degree or another which might have led to the murder and subsequent breakdowns of the people involved was handled deftly by the author.

The speculative conclusions offered seemed logical and even likely to me.

I found the book interesting but somewhat dry reading.  It will likely appeal to lovers of true crime/court procedurals or die-hard fans of Victoriana.

Disclosure: I received an ARC at no cost from the author/publisher for review purposes.
at February 03, 2019