The Colour of Murder 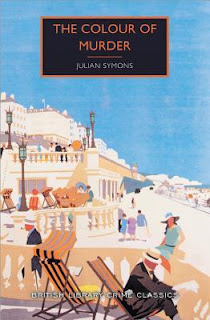 The Colour of Murder is one of the books selected for re-release as part of the British Library Crime Classics series. Originally published in 1957, this reformatting was released 5th Feb 2019 by Poisoned Pen, is 280 pages and available in paperback and ebook formats (other editions are available in other formats). This edition also includes an interesting and insightful introduction and historical biographical notes written by Martin Edwards. I always enjoy his intros because I inevitably find more mysteries and authors who were hitherto unknown to me.  His knowledge of the genre is encyclopedic.

The book itself is a thriller split into two sections. The first is a lengthy soliloquy by the main character, John Wilkins, to a consulting psychiatrist and is told in first person pov. The second part is third person and details the discovery of the murder (there's a long buildup to the identity of the victim) and the subsequent court procedure. The writing is very spare and direct. There were several points in both sections of the book where I found myself more or less uncomfortable reading. It's very well written but very direct and visceral. The main character (by his own admission) is something of a bully and abusive to his wife.

The book's ending is quite subtle and for people (like me) who prefer Poirot gathering everyone together in the library for the grand denouement, you might be left somewhat wanting.  The ending is somewhat subtle and rather left to the reader's interpretation.

I enjoyed it as a change from Poirot in the library.

Four stars, I'll look up more of the author's works.