Pint of No Return 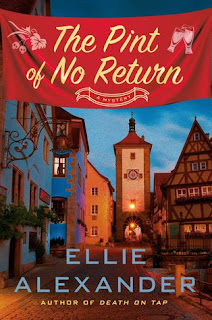 The Pint of No Return is the second book in the Sloan Krause cozy mystery series by Ellie Alexander. Released 2nd Oct 2018 by St. Martin's on their Minotaur imprint, it's 304 pages and available in ebook, paperback, hardcover, and audiobook formats.

This is a well written, decidedly cozy murder mystery with a side of romance. Main character Sloan is likeable and engaging.  The murder in the mystery follows the well established mystery 'rule' to make the victim as unlikable as humanly possible (which also handily provides a wide pool of suspects).

The author is either very well versed in the world of brewing or has an astounding capacity for in-depth research. I loved that she throws in lots of info about different methods of brewing, different hops varieties, and even some fun beer related chemistry.

There's a fair bit of light humor. There's some pun based humor, mostly in the names of beers and foods (and book titles), but nothing which I found especially egregious.

The book does contain some drinking (of course), but no extreme profanity (one 'sh*t') or sexual content. Nothing to make the average reader blush.

This is a good light-hearted cozy.