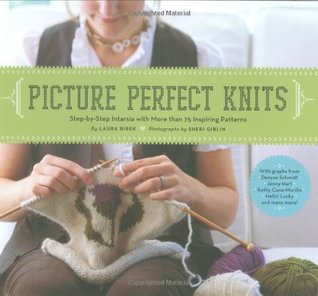 Picture Perfect Knits is a technique primer for knitters looking to try their needles on intarsia.

I do a lot of volunteer/charity knitting. The patterns for the charity projects are very very basic because the organizers want them to be as inclusive of all knitters, even non-knitters (we'll teach you!) as possible.  That means that after the 500th article one knits, there tends to be a sameness and since one is using the same yarn for many projects, one has a growing stash of incomplete skeins of the same yarns.  Because one of the main charities I knit things for is crisis premature babies, the articles can't have any dangly color floats to catch small fingers or the tubes to which the babies are attached. I love bright colors (and in my heart, I believe that bright contrast is good for babies' visual development). Enter intarsia.

I checked this book out as a source for intarsia patterns for small blankets and snuggies and other flat articles.  The book does include some projects and charts.  There were none which really appealed much to me personally.  I also admittedly found the author's writing style a bit off-putting.  I really feel like it was intended to be encouraging but read to me as somewhat condescending. I also felt like this was an 'all or nothing' technique book.  'Intarsia is what's been missing in your life all along'!  I like to think of it as a tool in the knitter's toolbox, along with other techniques for colorwork.  Except duplicate stitching. That's the devil in my opinion.

There are 10 complete tutorials included.

Part three (following the intro/technique chapter and complete projects) are stand-alone charts by 17 (by my count) different designers.  They are a mixed bunch, but there are several which I will be incorporating into some of my preemie blankets in the coming months.

Final thoughts - a mixed bag. There are definitely some usable takeaways, but I wouldn't recommend it as the only intarsia book in the knitter's library.