A Picture of Murder 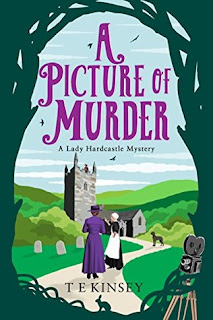 A Picture of Murder is the 4th Lady Hardcastle murder mystery by T E Kinsey.  Released 22nd Oct 2018 by Amazon on their Thomas & Mercer imprint.  It's 320 pages and available in ebook, paperback, and audio formats.

These books are the coziest of cozy period mysteries. Set in Gloucestershire in the early 20th century (this one's in 1909), they're fun and light, bordering on silly/daffy. Lady Hardcastle and her intrepid Watson  maid Florence, are on the trail of a cinema murdering fanatic who is apparently working through the plot of a horror film and doing away with the actors and actresses in the same manner as they die on film.

For lovers of modern period cozy mysteries, this might fill the bill.  I personally found the dialogue jarring in a number of places and found myself yanked out of the story fairly often.  The local charlady continually refers to people (usually Lady Hardcastle) as 'my lover'. The plot turns on a couple of key items which are dubious at best and there are some fairly large plot holes. That being said, if the reader is in search of an innocent, fun read with clean language (a few 'damns' and 'blasts' to be found, but nothing more egregious) and fairly straightforward plotting with a silly amateur sleuth+sidekick, this could fill the bill.

Possibly worth noting, for Kindle Unlimited subscribers, this and the rest of the series is available to borrow in the KU subscription.

Three and a half stars, rounded up for the jolliness of the romp.