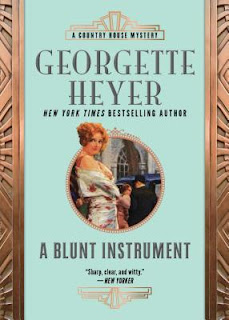 A Blunt Instrument is the 4th of 4 Inspectors Hannayside & Hemingway mysteries. Originally released in 1938, this reformatting and re-release on Sourcebooks Landmark imprint is 352 pages and due out 2nd April 2019.

Golden age mysteries are my favorites. I love the settings, the characters, and the (usually) civilized dialogue.  Georgette Heyer isn't my absolute favorite golden age author, but I've read (and often re-read) most of her books.  Though this is the 4th book to feature Inspector Hannayside, it works well as a standalone and there are no spoilers from earlier books with the inspectors.

As other reviewers have stated, this is less of a 'whodunnit' (the culprit is heavily foreshadowed) and more of a procedural with very droll and witty dialogue. I loved Neville and Sally (a monocle wearing mystery writer!), there were several places they had me smiling and chuckling out loud.

A worthwhile and diverting read.  The plotting is straightforward and the book makes a nice 'commute' read in that it can be picked up and put down without struggling to remember where you were.

Disclosure: I received an ARC at no cost from the author/publisher for review purposes
at February 09, 2019