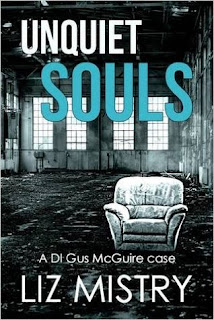 Unquiet Souls is the first book in the DI Gus McGuire series. Originally published in 2016 by Bloodhound books, it's a hefty 416 pages and available in paperback, audio, and ebook formats.

This is a very gritty modern procedural thriller set in Bradford, in Northern England. The setting and atmosphere are very well written and the characterizations and dialogue and writing in general are very high quality.  It's a well written book.

That being said, however, this is an extremely graphic book which I found difficult to read.  I had to take breaks at several places.  The plot revolves around an international pedophile ring.  There are fairly graphic descriptions of sexual assault, torture, and murder of children (and adults).  There is a completely awful description of neglect and abuse of a group of children which goes on for several pages and describes this group, some of whom are dead, being locked up together and abandoned .

The main characters are flawed and damaged.  The lead character is doing everything in his power to circumvent the reasonable protections for police injured in the line of duty by trying to dodge his therapy and recovery work.  I found him fairly unlikable, honestly.  He has a gigantic chip on his shoulder.  The fact that I personally found him not-terribly-relatable doesn't change the fact that this is a tightly plotted and well written book and the author clearly knows what she's doing.  DI Gus McGuire doesn't need (or want) my approval.

The language is just about as raw as the subject matter would imply.  The bad guys are world class nasty.

Four stars, it is well written, just not for those of us who prefer mysteries with more of a 'Colonel Mustard in the library' flavor, and murders without blood and gore.  And cats.  And possibly a few librarians or at least a bookmobile.  Definitely not that kind of book, here.

Possibly worth noting for kindle unlimited subscribers, all of the books in the series are included in the subscription for download.

Disclosure: I received an ARC at no cost from the author/publisher for review purposes.
at January 23, 2019