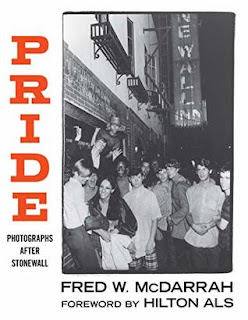 Due out 7th May 2019 from OR books, it'll be 240 pages and available in paperback and ebook formats.

It's been interesting to me to see the dichotomy between how much change has occurred in the last 50 years while not -seeming- to move forward quickly enough or comprehensively enough while living through it.  These pictures provide a window into a vanished lifetime. These photos were taken pre-AIDS and there's a vanished exuberance in a lot of the pictures; everyone's more cautious (and smarter) now.

The pictures are accompanied by commentary and prose by iconic writers/poets, including Jill Johnston, Allen Ginsberg, and Hilton Als, as mentioned earlier.

This edition was re-titled from the original Gay Pride to be more inclusive. The photos are annotated well, but there's no index or cross referencing to speak of. For readers willing to put in some effort and dig a bit, there's an impressive amount of history to be mined.  As someone who was a small child of politically active parents at the time, I can remember pride and peace marches aplenty. What I didn't know at the time was the human pain of which the political movements were born. In the modern American conservative political climate, I sincerely hope we're not headed back to those vanished days of brutality.

This would make a valuable support text for classroom modules for a number of history, culture, and gender studies subjects.  There's mature content in the book, including sex and violence.

Disclosure: I received an ARC at no cost from the author/publisher for review purposes.
at January 16, 2019