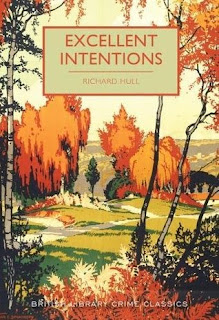 Excellent Intentions is one of the British Library Crime Classics series from Poisoned Pen Press. Originally released in 1938 (alternate title: Beyond Reasonable Doubt), and was written by Richard Hull, this edition is 240 pages and available in ebook and paperback versions.

This series, from various often lesser known authors, is a really nice selection of golden age classic mysteries which deserve re-release to a new audience.  I've reviewed a number of them and generally been very happy with the quality and writing.

This book has an odd setup.  The mystery is written around the trial for a murder of a despicable man. The book proceeds through the steps from prosecution through analysis, defense, summing up, etc. It's very linear and not really a 'whodunnit' in the classic sense.  I found the writing difficult in some places.  It's very formal and, to my modern eye, stilted. Much of the book dragged for me. It was well written, but developed very slowly. In contrast, the denouement was fleeting and the twist at the end left me feeling a trifle unsatisfied. It did lead me to think about the ideas of what really constitutes justice and what is a really fair outcome for the criminal trial process.

Anyhow, this series rates a high four stars overall. This particular book for me never quite made it.

Three and a half stars rounded down a bit because it was a slog for me to finish.  I think this would probably be a good choice for particular fans of golden age British mysteries or literary mystery history fans looking for lesser known out of print books.