The Infernal Battalion (The Shadow Campaigns #5) 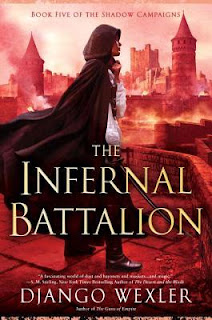 The Infernal Battalion is the fifth and final book in the high fantasy Shadow Campaigns series by Django Wexler. Released 9th January by Berkley publishing on their Ace imprint, it's 480 pages (over 2500 pages for the series) and available in hardcover, paperback, ebook and audiobook formats.

This is immersive campaign fantasy in a classic style.  It provides political action, campaigning, skulduggery, questing, magic and everything for the 'doorstop fantasy' nerd. I have followed the progress of the series and world building since the beginning, and will say right away that I believe that this final book would suffer greatly by attempting to read it as a standalone. There's way too much backstory and context necessary to be read by itself.

Mr. Wexler does a superb job of maintaining detail oriented plot progression (i.e., character focused) and balancing it against the panoply of a huge world-sized political commentary.  In my opinion the focus remains balanced and the characters have a vital role in plot progression without being overshadowed by or lost inside the wider world-campaign. The pace of this last book might be slightly more rushed than the previous books in the series. Going over my review notes, there were a couple of times I felt that the author wanted closure and was pushing a bit to get there.  Then again, after over 2500 (!!) pages, who could possibly blame him?

One thing I admire about this series very much is the strength of the female characters.  They are emphatically not there to swoon and cling helplessly to the legs of their captors/saviors. They're real, flawed, strong, and (mostly) intelligent.

I enjoyed the series very much and thought this last volume did a good job of wrapping up the disparate plot threads.  It wasn't too perfect or happy-happy.  It was mostly complete.

The language is about average for a doorstop fantasy. There are a fair number of curse words used and some sexual content. I don't imagine it would offend the majority of readers.

I'll miss looking forward to each new book as it's published.

Four stars, and four strong stars for the completed series.