Fashion in the Middle Ages 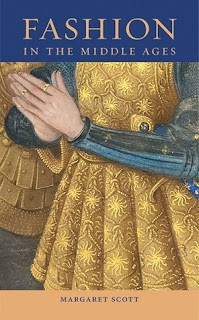 Fashion in the Middle Ages was originally published as an exhibition catalog accompanying a historical retrospective at the J. Paul Getty museum in 2011. The book was apparently organized in relation to the physical exhibits in the museum, because it's not arranged in any obvious relation to time period, culture, or world location. This causes some amount of confusion and 'cultural whiplash'. I did enjoy Dr. Scott's commentary on sumptuary laws and the use of different materials.

There are interesting and well written notations about the curated objects.  Many of the illuminated pages are very well notated with interesting observations about the depictions being of a different culture or time period from that in which the objects were produced.


I enjoyed this small volume. I would have liked to have seen the original display.

Three and a half stars, most likely more (4 - 4.5) for the paper versions with better illustration reproductions.

Disclosure: I received an ARC at no cost from the author/publisher for review purposes.
at December 21, 2018