An Act of Villainy 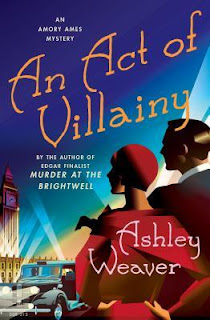 An Act of Villainy is the 5th book in the Amory Ames mystery series by Ashley Weaver. Released 4th Sept 2018 by Macmillan on their St. Martin's press imprint, it's 309 pages and available in hardcover, ebook, and audiobook formats.

I've been a fan of this series from the first book.  My favorite genre is classic mystery especially in the interwar period.  This one ticked all the boxes for me. Amory and her bounder(ish) husband Milo are drawn into the theatre world via a couple with whom the Ames' are social friends.  There is drama on and off stage and murder soon follows.

This book (and the series) are well written and entertaining.  I like Amory's sensibility and grit.  She's quite sophisticated and social but there are subtle hidden depths to her strength and intellect.  She's nobody's fool.

I liked that the Ames' mostly managed to support one another and cooperate through the book.  Their recently strengthened marriage is played out in counterpoint to their friends the Holloway's, and when Gerald Holloway's mistress turns up murdered, Amory turns to detecting to help solve the murder and maybe help her friends at the same time.

The dialogue is well written and though it reads well to modern readers, it's fairly true to the period in which the book is set. In fact the series reminds me a lot of Hammett's Nick and Nora. Weaver isn't Hammett, but these books compare favorably and the author is still alive and still writing, long may she continue to do so!

Four stars, well worth a read.