Sofia and the Pornographic Penguin 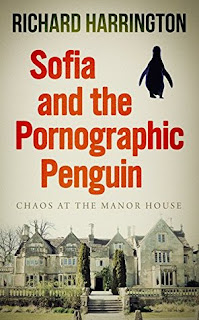 Sofia and the Pornographic Penguin is a genre defying new release from Richard Harrington.  Released 12 July 2018 by Amazon, it's 274 pages and available in paperback and ebook formats.

This is ostensibly the first novel in a series (Sofia and the Manor House Saga).  There are some mystery elements but the author seems to mostly be aiming for farcical comedy.  It struck me as a cross between a Benny Hill sketch and Steven Moffat's series 'Coupling' (anyone else remember that one?). I spent about 80% of my time reading this book rolling my eyes.

I'm not offended by language or sexual content.  For readers who want their narratives clean and tidy, move along.  The book is absolutely full of raunchy double entendres and inappropriate language.  There are many raunchy stand up comedians who leave me doubled over gasping from laughing.  This book missed by a mile for me.

For me, two stars.  Reading the reviews and ratings from other readers, I appear to be in the minority.  It's possibly worth noting that the book is available to download and read for free for Kindle Unlimited readers. For readers who wish to try an excerpt, you can find a readable excerpt on Amazon on the book's page.