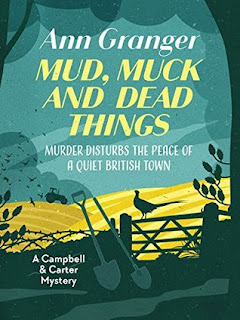 Mud, Muck and Dead Things  is a re-release of the 1st book in the Campbell and Carter mystery series by Ann Granger. Originally published in 2009, this reformatted version was released 14th May 2018 by Canelo and is available in ebook format.

I read pretty much anything and everything, however, if forced at hypothetical gunpoint to choose only one genre, I'd have to say English crime, the more 'golden age' in feel, the better.  This series is set in more or less modern rural England and even though it's a modern series, it has a light nostalgic feel.

Some of the characters in this series are a tie in to one of the author's other series and have a similar vibe. This book is well written with readable dialogue and the plot moves along at a good pace. There is a small element of magical realism/ghost stuff in the plot, but it's not vital to the story and doesn't detract. The book is very clean in language and sexual content, and apart from an occasional 'damn' or 'shit' won't offend any readers.  There is some discussion -of- sex, but no sexual content per se.

All in all this is a good start to a well written and entertaining mystery series.  It's nice that these are being made available again in electronic format at a very attractive price point ($2.50-$3 USD).

Disclosure: I received an ARC at no cost from the author/publisher for review purposes.
at November 20, 2018