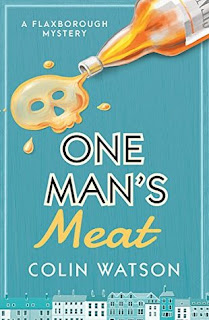 One Man's Meat is the 9th Flaxborough mystery by Colin Watson. Originally released in 1977 as It Shouldn't Happen to a Dog, this reformat/re-release is 194 pages from Farrago Press and is available in ebook and paperback formats.

It's been a lot of fun to revisit these silver age English procedurals and this one in particular is a joy.  The general naughtiness level is less than most of the others in the series (with the exception of implied nudity/sex) but the wit and double entendres abound.  This outing for Inspector Purbright and co. sees them up against murder and double crosses galore along with industrial espionage.  Miss Teatime features prominently in this volume and she's delightful as always.

I enjoyed the plotting and spareness of the prose.  It's only 194 pages, so a quick read.  Watson is incredibly adept at providing clues in the narrative without beating one over the head with them.  Nothing goes to waste in his writing and I could only shake my head in wondering admiration of the way he ties everything together at the end.  Brilliant.

This is definitely my favorite book in the series.  Wonderful writing.  I think Watson compares quite favorably with Maugham, if a bit more cheeky and given to sly *nudge* *wink* in-jokes occasionally.

Five stars, well worth chasing down for a smile and a pleasurable reading interlude.